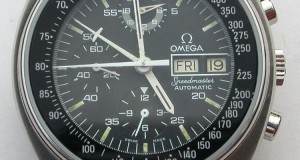 What type of a watch would a Porsche fanatic like Magnus Walker would like to wear? This self-made millionaire is seen wearing an Omega Speedmaster Automatic ref. 176.0012 that was most probably released in the year 1974. This certainly proves that the creator of Urban Outlaw clothing does have a sense of style in addition to his millions and Porsche cars. He gained his fame through the large number of cars he owns and also due to the expertise he has on his favorite brand of vehicles.