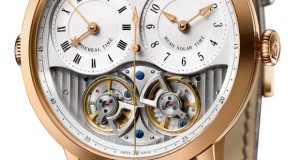 Arnold & Son watches have an intrinsic and long history, as the brand has been creating maritime instruments for the British government for a very long time. Jon Arnold, born in 1736 and founder of the company, was a British man who went to the Netherlands at the age of 19 to learn the craft. After his return to Britain he became a highly reputable watchmaker and he and Abraham Louis Breguet became friends. They were very close and actually appointed each other’s son as their apprenticeships. Arnold & Son watches are said to be around since 1764, however their presence has not been a constant.