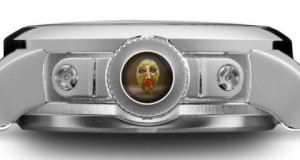 The prestigious nano-sculpture, Willard Wigan, is working in an exciting Project, along with Stephen Forsey and Robert Greubel. This beautiful partnership started four years ago (2008) in London. Willard Wigan at first was not really interested in this world of watches. He was simply in another mindset. Wigan’s world was all about micro sculptures, and then he got invited by Greubel and Forsey to join forces.