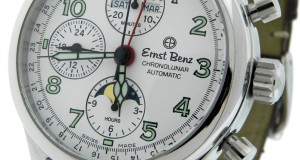 In 1960 the Ernst Benz brand was known for its manufacture of watches for planes inspired by World War II. The first model was the Benz Micro Aircraft Chronograph, which became a priority instrument for many single-engine aircrafts, gliders and military instructors. It was considered as the most famous in Europe and, years later, it was a global boom.