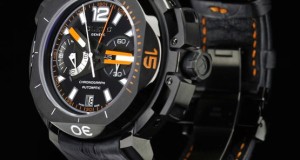 Clerc Watches incorporated a large central minute hand in their latest watch launched at BaselWorld 2013 watch and jewelry show. The idea behind the concept is to keep track of elapsed time and it is a nice innovation on the part of Clerc Watches. Now, you can read the time a lot easier than doing so from a small sub dial. Clerc Hydroscaph Central Chronograph Limited Edition Watch of 500 numbers does have two sub dial registers at 3 O’ clock and 9 O’ clock positions. Of these, the former one denotes small seconds and the latter one denotes the 24 hour day and night hand.