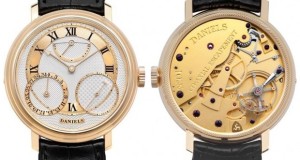 George Daniels is a true legend in the world of watchmaking art. He invented co-axial escapement. In honor of the 35-year anniversary of this invention, the brand established by George Daniels himself, produced anniversary watch. According to the words of representatives of the company: “George loved the dial layout. He preferred to use it in the wrist watches and pocket chronographs. For this reason, that particular dial layout was chosen for anniversary model.”