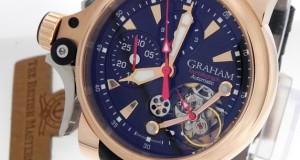 Graham is an English name for an English watch. The name of the brand comes from the surname of George Graham, a master watchmaker born in 1673.  He is credited with several inventions that he never patented, such as the first stopwatch, the dead-beat escapement, also known as the Graham Escapement and a precursor of the Swiss anchor movement used in wristwatches, and the master clock for Greenwich Royal Observatory.