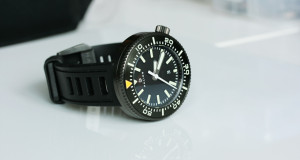 The Halios 1000M DLC, also known as the “Puck”, is a large black diving watch that resembles a hockey puck. At 47 millimeters wide and almost 15 millimeters thick, it’s a large and heavy watch. It resembles a hockey puck, which is probably how it got the nickname. That seems appropriate, considering that Halios is a Canadian company. Much like the puck used in hockey, a dive watch has to be able to take a beating.