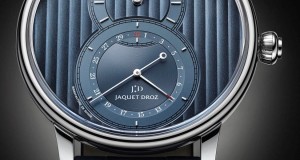 Jaquet Droz watches did turn a lot of heads with their new creation launched at the Baselworld 2013 watch expo. Jaquet Droz watches came out with the Grand Second Quantieme in two versions! The watchmaker came out with this watch for the first time in the year 2011 and bowled many watch lovers over. The original grand second was created in stainless steel. In the 2013 versions, they are redone in two avatars. The first one is chocolate brown in color and the second one is bluish in color. Both of them feature vertical Geneva striping on the dials as well. All in all, Jaquet Droz watches have accomplished what they went out to achieve.