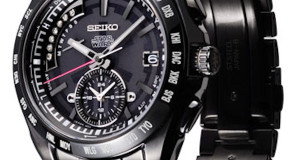 Japanese watchmaker Seiko is paying tribute to the 35th anniversary of Star Wars as well as the upcoming release of the 3D version coming soon to theaters. Six limited edition models will be released totaling just 5,000 pieces. Considering the popularity of Star Wars they will be sold at just as soon as they are released.