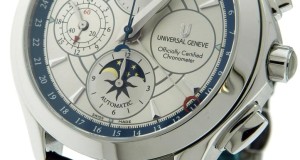 Universal Geneve is a Swiss luxury watch company. It was founded in 1894 and was originally named Universal Watch. The company is one of the few watch brands that has produced its own in-house movements since the beginning. Universal Geneve is a highly regarded company that is ranked among the top luxury wristwatch companies along with Patek Philippe, Rolex, and Audemars Piguet.