Best Artworks by Tintoretto to Be Shown in the USA

You are here: Home » Art & Culture » Best Artworks by Tintoretto to Be Shown in the USA 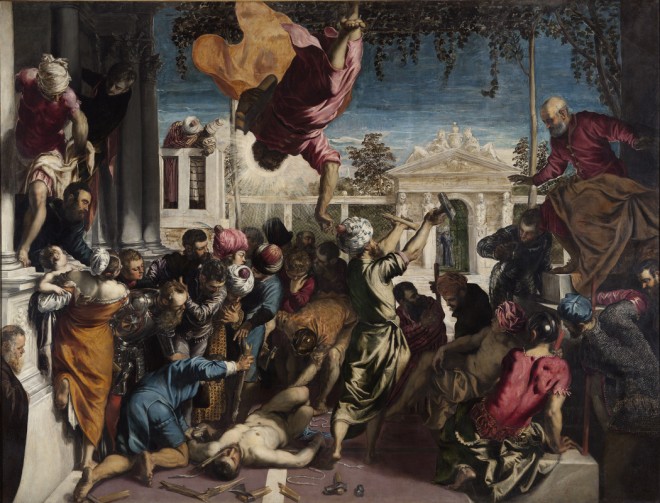 Among the famous artists of the XVI century, who worked in Venice, Tintoretto was the most Venetian. For 75 years of life, he left his hometown only once. Many of his bright paintings are still in the churches and scuolas (religious brotherhoods) for which they were created. In the autumn of 2018, Venice celebrated the 500th anniversary of the birth of its outstanding painter, who is called the “avant-garde superstar” of the Renaissance. Now, the best artworks by Tintoretto will be shown in the USA for the first time.

Jacopo Robusti (1518/1519-1594) was nicknamed “Tintoretto” or “little dyer” because his father was engaged in painting fabrics. The family had 21 children, and the future painter was the oldest. His daughter Marietta, sons Marco and Domenico also became artists. The latter had inherited a large family workshop and created good quality, but devoid of inspiration paintings following his father’s artistic manner. Some of them are sometimes mistaken for the masterpieces of the senior Tintoretto. Art critic Robert Echols spent 30 years unraveling the attribution of such artworks. The earliest painting – and one of the best artworks by Tintoretto, – dated with certainty, is “The Contest Between Apollo And Marsyas” (1545) from the private collection of the Wadsworth Atheneum art museum in Hartford, Connecticut. It was written for Pietro Aretino, who in a public recommendation noted the speed of its execution and the genius of the artist.

The Venetian painter chose for his figures somewhat bold angles and expressive poses – in imitation of Michelangelo. Allegedly, the motto was inscribed on the wall of the Tintoretto’s studio: “The drawing of Michelangelo and the color of Titian.” However, unlike the author of the frescoes of the Sistine Chapel, Tintoretto worked very quickly, using only light and shadow to model the forms. Because of this, the figures look as if they have gained plasticity with the help of magic. When developing large-scale compositions, Tintoretto used to create a model of small wax figures that were placed in a certain way or hung in boxes. They were illuminated in such a way that the combinations of light and shadows in the painting he was writing were the same as in the room where it was supposed to hang. It is a distinctive feature of the best artworks by Tintoretto.

The paintings for Scuola Grande di San Rocco, which he performed with intervals between 1564 and 1587, are considered the peak of Tintoretto’s career. The walls and ceilings of the building are almost completely covered with religious masterpieces, which are sometimes compared with the frescoes of the Sistine Chapel. They depict scenes from the Old and New Testaments and the lives of saints. The largest canvas art work in the world belongs to the brush of Tintoretto. “Paradise,” decorating the main hall of the Doge’s Palace in Venice, reaches twenty-five meters in length and nine meters in height. When the artist started painting, he was 70 years old, and apprentices under the guidance of the painter’s son Domenico had to finish the picture.

The most expensive painting by Tintoretto, for now, is “Portrait of an Elderly Bearded Man,” written in the mature period of the master’s career. In July 2008, the canvas artwork, which from the end of the XIX century was part of the English private collection, was sold at Sotheby’s auction for 1.6 million pounds (3.1 million dollars). At the same time, the preliminary estimate of the artwork was only 200-300 thousand pounds. In the spring of 2019, best artworks by Tintoretto will go to the National Gallery of Art in Washington.