You are here: Home » Art & Culture » Edvard Munch’s Exhibitions in London and Moscow 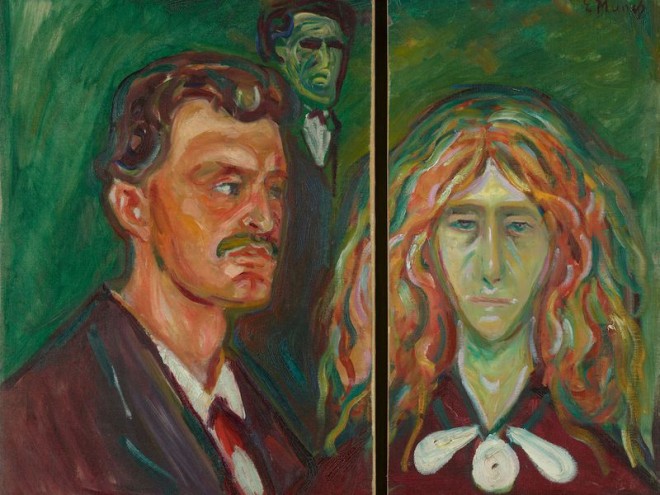 Among the highlights of the exhibition “Edvard Munch. Love and fear,” which opened in the British Museum, is a scandalous artwork by the Norwegian artist titled “Self-Portrait with Tulla Larsen.” Munch created this painting in 1905 and two years later, in an effort to get rid of his love obsession, cut the canvas into two parts. The largest Edvard Munch’s exhibition of prints by the remarkable creator of expressionist art in the UK also features his paintings. Undoubtedly, the most famous art piece by Munch – “The Scream” – has become one of the most iconic images in the art world partly overshadowing other works of the artist. The British Museum presented 83 artworks to the public, including 50 prints from the Munch Museum in Oslo.

Queen Sonja of Norway visited the opening of Edvard Munch’s exhibition in London. In her welcoming speech, Her Royal Majesty said, “I think many of us can see ourselves in his art. Munch is universal because he shows us who we could be – on a large canvas between love and fear.”

Edvard Munch divided “Self-Portrait with Tulla Larsen” into two parts in 1907, and for a long time both parts existed separately – as the “Self-Portrait against a Green Background” and the “Caricature Portrait of Tulla Larsen.” The daughter of a rich wine merchant, Tulla occupied the heart and thoughts of Munch for several years; their whirlwind romance was not easy for the legendary expressionist. There was everything – a failed marriage, exhausting scandals, scenes, and Tulla’s suicide attempts. After the final breakup, emotional devastation and almost obsessive desire to get rid of thoughts about Tulla forced Munch to depict her image again and again. One of the vivid examples is the painting titled “The Death of Marat” (1907) where Tulla Larsen appears in the image of Charlotte Corday, and the artist depicts himself as dead Marat. Later another art piece was created – “Cupid and Psyche” – to represent a confrontation filled with silence and desperate longing. Paranoid attacks were becoming more frequent, and soon Munch was forced to seek psychiatric help. Tulla Larsen left a deep and painful mark in the heart and work of Munch, and all subsequent years, the artist referred to her only as “that woman.”

Another Edvard Munch’s exhibition opened on April 17 at the State Tretyakov Gallery, one of the largest Russian fine art museums besides the Hermitage. Unlike the British Museum, the Moscow exposition focuses on paintings – there are about 70 of them. Thirty graphic artworks, photographs and memorial items from the Munch Museum in Oslo, as well as from the Pushkin State Museum of Fine Arts, are presented to visitors. The most famous exhibit is “The Scream,” one of the variants of which is kept in the Munch Museum. This retrospective exhibition covers all stages of the outstanding Norwegian artist’s work, from symbolism to expressionism.

The Edvard Munch’s exhibition in the Tretyakov Gallery is open until July 14, 2019. The exposition “Edvard Munch. Love and fear” in the British Museum can be visited until July 21, 2019.