Fire on Ice – The Hottest Luxury Rides for Ski Season

The winter of 2013-2014 has fallen upon the northern hemisphere like a siege. In the United Kingdom, this has been the wettest winter since 1910 – and they’re the lucky ones. Britain’s opposite numbers across the Atlantic haven’t been so fortunate.

United States and Canadian residents have borne the brunt of a skin searing seasonal assault that threatens to become one of the worst winters since Mammoth fur was the rage.

Anyone who bothers to watch news will have seen weather records falling like an avalanche. Chicago is facing its coldest winter in 30 years. In Detroit, a city that knows a thing or two about hard knocks, this January was the snowiest since records commenced in the mid-nineteenth century.

But Detroit also knows horsepower, and the wheels of this city don’t stop when the temperature drops. When winter weather sends supercars scurrying to the safety of the parking garage, a special breed of luxury machines take to the streets.

300magazine presents two burly winter weather luxury rides guaranteed to make the mercury – and heart rates – rise. Hailing from Austria and the United States, these rigs combine four-wheel drive firepower with sizzling style hot enough to leave Old Man Winter nursing third-degree burns. Behind the wheels of these sleighs, even Santa would end up on the naughty list. 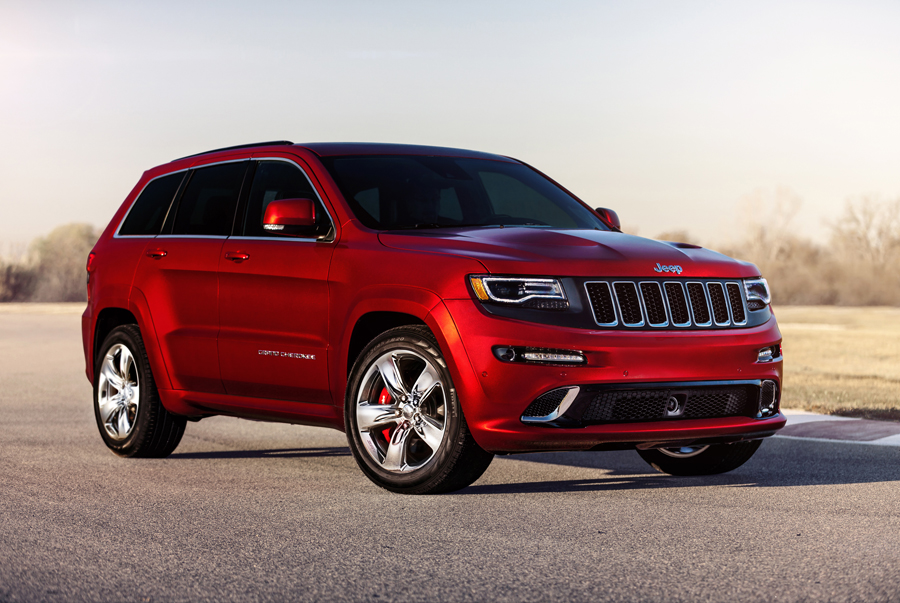 Fittingly, Detroit’s hometown hero, the Grand Cherokee SRT, leads our double-barreled onslaught of winter road warriors. Technically, this model represents the top of the Jeep Grand Cherokee lineup. However, such is the degree of performance tuning by Chrysler’s Street and Racing Technology team that the SRT is marketed as a stand-alone SRT product.

Astute followers of luxury watch news may consider the Jeep to be something of a road-going Rolex; it was born as rugged tool, but it has been polished to a designer shine. 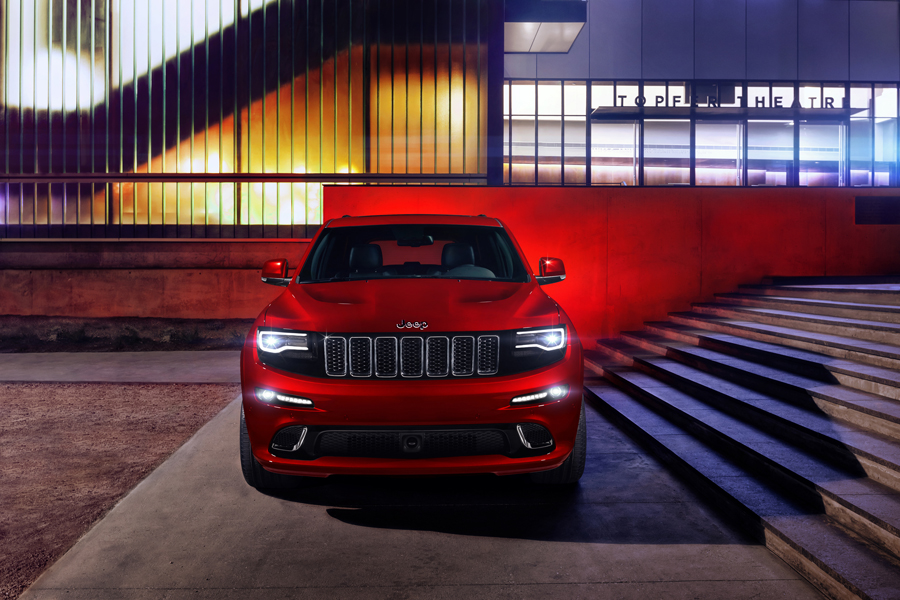 The SRT hits harder than a gangland drive-by and strikes even faster. SRT group’s 470 horsepower 6.4 liter Hemi V8 also packs a magnum-grade 465 lb.-ft. of torque. While this engine features in several SRT vehicles, the Grand-Cherokee SRT’s signature is its Jeep all-wheel-drive system.

While the initial 2012 and 2013 SRT Jeeps were encumbered by an aging five-speed gearbox inherited from Mercedes-Benz, a newly-developed eight-speed unleashes the Hemi’s full potential. The new box keeps the engine on boil through the meat of the power band and throughout a wider range of vehicle speeds. Simply put, the power is ready and willing when you are.

As the only SRT vehicle equipped with four driven wheels, the Grand Cherokee features brutal acceleration that puts even its stable mates Challenger and Charger to shame. Among SRTs, only the Viper is quicker. SRT claims 0-60 sprints of 4.8 seconds and quarter mile E.T.s in the mid-13 second range.

Don’t’ believe it; the Grand is much quicker than that. As tested by Car And Driver, 60 mph and the quarter mile fell in 4.6 seconds and 13.2 seconds, respectively. Torque braking the engine while revving to the 4,300 rpm power peak results in a brutally quick launch that only a masochist and his chiropractor could love. Unlike the other SRT products, the Grand launches with no wheel spin and converts all of its Olympian torque into instantaneous forward motion.

While the acceleration may not be completely unexpected, the handling might be. This Jeep can dance. When warm weather returns, the SRT’s gumball-soft summer rubber permits cornering forces close to .9g; that was BMW M3 territory a few years ago. In all weather, the Jeep’s potent Brembo brakes with electronic brake balancing and panic boost provide stopping power to match the horsepower. 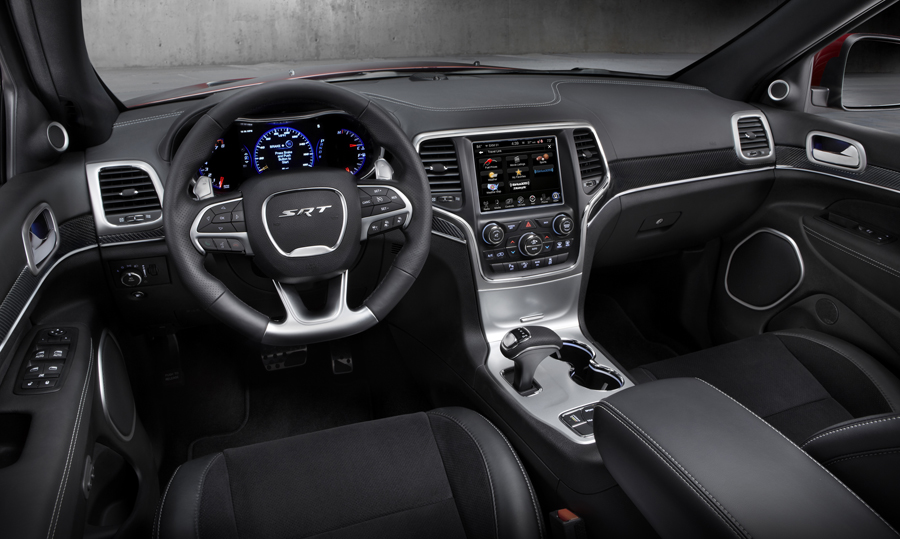 While the $63,995 base price is a bold ask by Jeep, the value of the package lies in the large number of premium features included as standard; only a handful of minor options are available. Humiliated Ranger Rover Sport, Porsche Cayenne, and snow-stranded sports car drivers also come standard.

When equipped with snow tires, the Grand Cherokee SRT handles winter roads with aplomb. Although it isn’t a rock crawler like its Jeep-branded cousins, the SRT has the ride height and four-wheel grip to make short work of winter roads… one quarter-mile at a time.

Compared to the SRT, Mercedes-Benz’s G-63 AMG is a veteran – in more ways than one. The truck currently marketed as the G-Class was designed in the late 1970s as the military Geländewagen. Its Hummer-like capabilities were engineered to satisfy contract requirements of the Berlin Wall-era West German Army. For over twenty years, the truck changed very little while the world transformed around it.

By the time it arrived on U.S. shores in 2002, the Geländewagen had acquired a new name: G-Class. What started life as a metal-floored, diesel-powered troop transport had become the world’s hardest-core luxury SUV – or perhaps it was the most luxurious hardcore SUV. Either way, the truck was badass rolling thunder, and luxury buyers embraced it in a big way.

Ironically, the 2006 G55 was intended as a final pyrotechnic salute to the G-Class before its presumed replacement by the then-new GL-Class SUV. Sales dictated otherwise. For once, the coin-counting accountants who watch news of overseas sales trends actually rode to the rescue of a driving enthusiast’s darling.

Now in its fourth decade of production, the hottest variant of the G-Class looks better than ever. 2012 brought a comprehensive interior update that harmonized the gauges, switchgear, materials, and technology with the mainstream Benz lineup.  2013 witnessed the arrival of a monster mill: AMG’s 536 horsepower supercharged V8.

The 2014 G63 is the automotive equivalent of Mike Tyson. Sure, he’s older, a bit goofy in polite company, and somewhat domesticated by reality TV. But one square hit will still transplant your front teeth into your brainstem.

The new turbocharged 5.4-liter V8 is the twinkle in this three-pointed star. It is a contemporary twin turbo with direct injection and variable valve timing. Turbo lag is a non-entity, and the full 560 lb.-ft. of torque hits like, well, Iron Mike – and from only 2000 rpm.

Unlike the Jeep, the G-63 does suffer a small performance detriment as a result of a chassis designed when Elvis was still touring. Absolute cornering limits do not reach the sports car levels of the SRT, but the G63 has a trump card in the form of that monster motor. 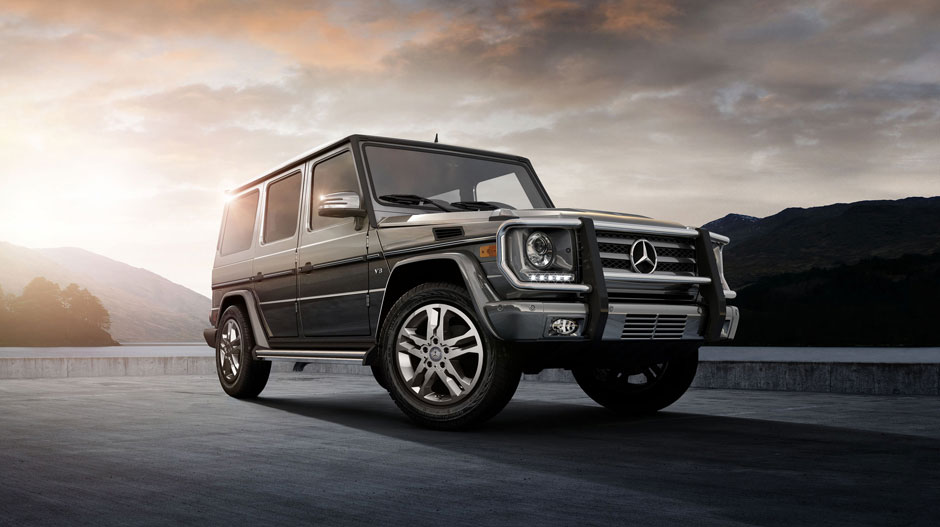 The AMG M157 V8 pulls with enough force to make aircraft carrier catapult technicians feel inadequate by comparison. When paired with the G63’s modern seven-speed gearbox, the AMG-fortified juggernaut barely trails the SRT to 60mph but draws even by the century mark. The G63 continues to match the 600lb. lighter SRT through the quarter mile.

So, what does that 600lb penalty earn the G-Class driver in the winter? The answer is capability. Unlike the SRT, the G63 surrenders none of the basic truck’s off-road competence in exchange for on-road firepower. The G63 features an armored underbody, a four-wheel drive system with a true low range, and no fewer than three push button-activated locking differentials.

Basically, it will crawl over anything its NATO counterpart can. The AMG G-Class is the rare (only?) truck that can lock horns with Hummers and Hot Rods.

Designed in Stuttgart, Germany by Mercedes, tuned in Affalterbach, Germany by AMG, and built in Graz, Austria by Magna Steyr, the G-Class came of age in the American market. 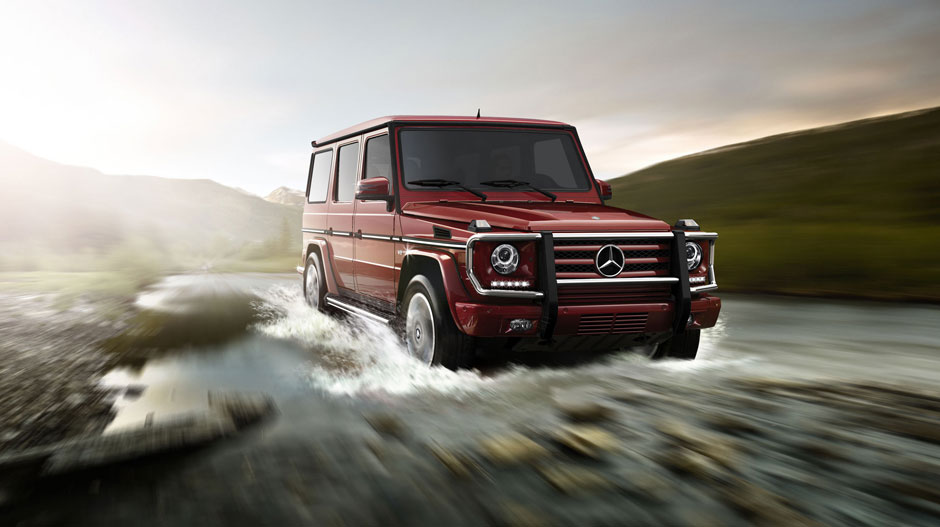 The G63 presents a unique case study in which a gaggle of chefs not only didn’t spoil the broth, they blended a stellar pichelsteiner. Thanks to insatiable U.S. demand for the original Black (Forest) Box, Mercedes recently renewed its G-Class production contract with Magna through 2015. 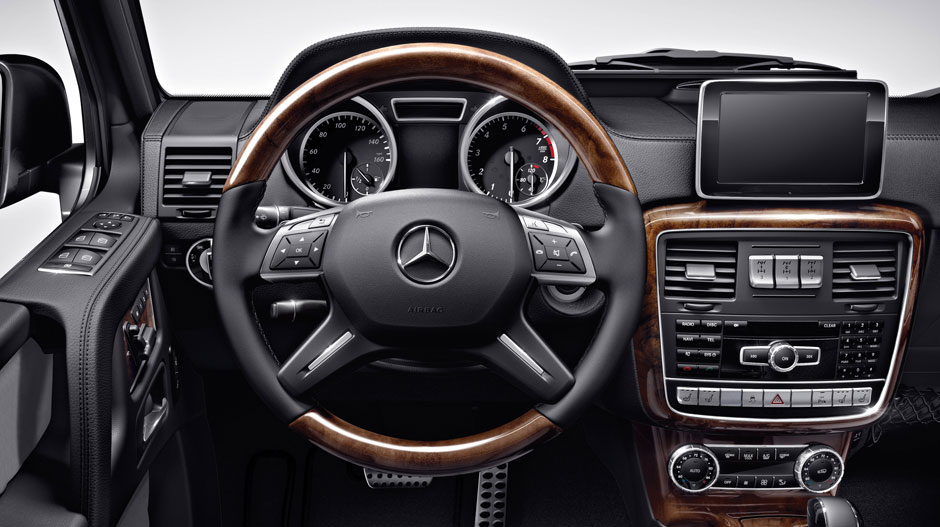 Despite its formidable off-road chops, S-Class level of interior amenities and $135,700 base price, the G63 cannot overcome the SRT on slick winter snowpack or summer slaloms. Performance luxury buyers who watch news of automotive road tests will discover this quickly. The Jeep is the dancer and the road-focused winter driver’s truck. Its sophisticated all-wheel drive and sufficient ground clearance endow it with just enough foul weather ability to be a strong two-way player on good roads and bad.

By comparison, the G63 is the true off-road rig. Its mil-spec underpinnings and steel-toed boot of a body have been civilized just enough to make the luxury cut. Off road, however, this snohaus on wheels is ready to open shop as an impromptu ski lodge anywhere the driver pleases – like the Klondike, for instance. Unlike the Jeep, MB’s latter-day panzerwagen remains just as potent when the snow melts and the rock crawls begin.

Ultimately, both trucks excel in the deep freeze. Given a choice between these winter warriors, there can be no clear winner.  There can only be… a cold war.