How Art Materials Changed the Course of Art History

You are here: Home » Art & Culture » How Art Materials Changed the Course of Art History

Painting now requires much less effort from the artist than several centuries ago. The difference between art materials became a decisive factor that affected the process of work creation. Van Eyck’s innovation in the 15th century and the new principle of paint storage, which appeared in the second part of the 19th century, changed the course of art history forever.

The appearance of the most popular art materials

Before the 15th century, painters usually used water-based and egg-based colors called tempera for painting on paper or wooden panels. Tempera was great material, with colors preserving their brightness for many years. However, it didn’t allow to paint with a thick layer, and it dried very fast.

Oil paints were also known at the time, but their formula was imperfect. The colors were muted and dirty, and such art materials dried too long. The situation changed in the 15th century when Jan van Eyck, one of the most influential northern Renaissance painters, improved the composition of oil paints. He also found appropriate proportions and combinations of oils for colors. His favorite one was the linseed and nut oil blend.

Since this modification, oil paint became one of the most popular art materials in art history. Painters started to use canvases, which allowed transporting art in a more comfortable way than pieces on a wooden panel. However, oil paints still had one disadvantage – painters could use them in their studios only. The situation would change in the second part of the 19th century. 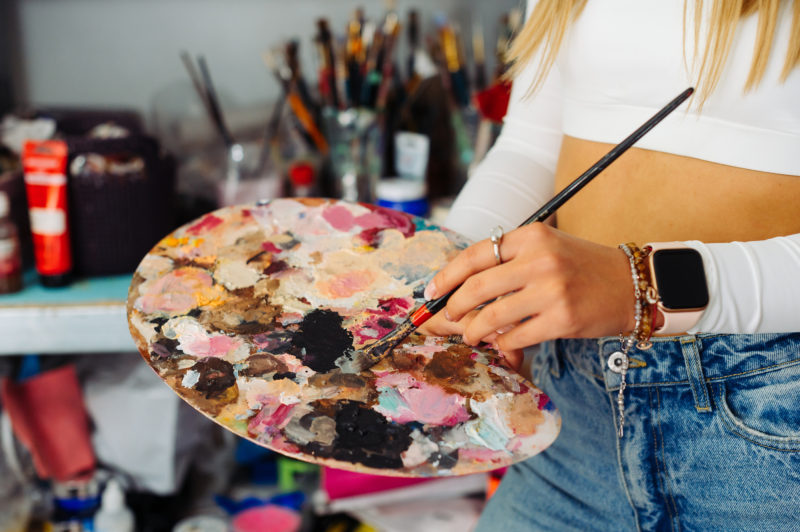 Before the mid-19th century, oil paints were held in pouches made from pig bladders. If the painter wanted to use certain paint, they had to pierce the pouch and seal it after work. Due to this process, the paint dried too fast. In 1841, the American artist John Goffe Rand patented metal tubes for paint storage, but they had inconvenient covers. A year later, in 1842, “Winsor & Newton” started to produce similar tubes but with screw caps.

The appearance of comfortable tubes allowed artists to work in the open air. Without these changes, Impressionism would never appear and art development would have a completely different scenario.

The history of art materials is an integral part of art history. Their role should not be underestimated because they changed the way artists work and gave birth to a whole new art direction.