Man of the Times: Jean-Claude Biver’s New Challenges at Zenith and TAG Heuer, Part I

Posted by: Ilya in Masters of Time February 7, 2014 Comments Off on Man of the Times: Jean-Claude Biver’s New Challenges at Zenith and TAG Heuer, Part I 3786 Views

Jean-Claude Biver hardly qualifies as new to Swiss-watch-industry nomenklatura, but his latest challenge within the Louis Vuitton Moet Hennessy group sees him tackle a novel challenge: TAG Heuer and Zenith.

For over four decades, Jean-Claude Biver has been the hidden hand behind several of the industry’s greatest success stories. A Luxembourger by birth, Biver came of age as an entrepreneur and watch connoisseur during the Quartz Crisis of the late seventies and early eighties. During this, the darkest era of the modern watch industry, Biver displayed a visionary flair for rebranding and repositioning the moribund Swiss-mechanical watch to withstand the competitive onslaught of cheaper Asian quartz.

Facing a relentless competitor holding every technological and economic advantage over the Swiss products, Biver was among the first and most vocal proponents of the idea that saved the Swiss watch: Take the high ground.

If Swiss mechanical watches could not undercut the price or accuracy of the Japanese competition, Swiss watches would monopolize the super-premium market and the profit margins accruing thereto.

In the late seventies, Biver joined Audemars Piguet in Switzerland’s Vallée de Joux. During those dire times, AP was among the walking wounded of an industry on the brink of collapse.

Others were less fortunate. In 1981, Biver, having learned the fundamentals of haute horlogerie via Audemars, and a brief stint at Omega, seized upon the chance to purchase the name and trademarks of the bankrupt watchmaker Blancpain.

In conjunction with his friend Jacques Piguet of the movement manufacturer Frederic Piguet (no relation to Audemars), Biver commenced a systematic resurrection and rebranding of the derelict Blancpain.

With Blancpain, Biver debuted the strategy that would form the basis for his subsequent three-decade Midas touch. He instantly recognized the essence of the Blancpain brand — the sensibilities and preferences of the company’s still-loyal enthusiasts — and he played both like a harp.

Allegedly Switzerland’s oldest watch manufacturer, Blancpain already planted its seeds as a strong brand identity. Biver took advantage of the company’s collapse early in the Quartz Crisis; as an early casualty, Blancpain never had a chance to design and market a quartz watch.

Biver re-launched Blancpain with ad copy that boasted of the company’s unbroken record of fidelity to the mechanical-watch tradition. Never mind that it was an accident of fate. The ads bellowed, “Since 1735, there has never been a quartz Blancpain watch. And there never will be.”

This was the genius of Jean-Claude on full display. He understood the fundamental appeal of his products, he identified with the sensibilities of the target customer, and he always followed through to ensure seamless execution down to product design and service at the point of sale.

More than a marketer, Biver recognized that his traditionalist sales pitch required a commensurate degree of product sophistication. In conjunction with his colleague Piguet, Biver’s Blancpain developed the 1180 series of chronograph movements to power a new generation of complicated Blancpain watches.

Still considered a point of reference for engineers of super-premium chronographs, the 1180 Piguet movement backed Biver’s anti-quartz bluster with serious substance. Customers responded by embracing the brand, and its prestige soared.

Biver had taken Swiss watches upmarket, and his notable enterprise had succeeded in battling the Japanese to a standstill in the trenches of discount retail.

By 1992, even Swatch manufacturer SMH realized that the future of Swiss horology, not to mention the profits, lay in the high-end of the market. SMH purchased Blancpain from Biver and Piguet in a deal that returned almost 3,000 times Biver’s initial investment in Blancpain.

No sooner had Biver joined the SMH fold than he was recruited to rehabilitate its former flagship brand, Omega. Once a titan of the Swiss-watch scene, Omega had suffered a double disgrace during the Quartz Crisis.

First, Omega failed to respond to the influx of cheap quartz watches and lost market share.

Second, Omega was slow to recognize that the pendulum had begun to swing back toward mechanical timepieces, thanks to the rebranding efforts of firms like Rolex and Blancpain. Omega’s knee-jerk reaction, which involved mass-producing quartz watches, had devalued the brand so dramatically that it lacked credibility to enter the safe harbor of the luxury-watch market.

Biver fixed Omega. It’s as simple as that. Underpinned by engineering muscle from Swatch movement builders Lemania, the powerhouse ETA, and the newly-acquired F. Piguet, Omega possessed the tools to produce timepieces of real substance. Biver correctly judged Omega’s greatest vulnerability to be its tarnished image.

Pierce Brosnan, Michael Schumacher, Cindy Crawford, George Clooney, and an army of “brand ambassadors” were brought aboard to restore luster to Omega’s fallen star. The company’s historic links to space exploration and aviation were re-emphasized. Olympic and Formula One sponsorships, product placement in James Bond movies, and a global network of new Omega boutiques placed the faded brand back in the public eye and back on consumer radar.

Omega sales soared over three-fold during Biver’s decade at the helm.

Behind the scenes, Biver ensured substance to match the hype, and he oversaw the implementation of the coaxial escapement that would define the next decade of Omega product development. Biver left Omega in 2003 to pursue cheese production, his greatest passion alongside luxury timepieces.

Biver dedicated several months to his farm work before returning to the watch industry as the CEO of Hublot in 2004. In January 2014, Biver arrived at Zenith and TAG Heuer by way of LVMH, which acquired Hublot in 2008.

Let us see what Biver will accomplish next. 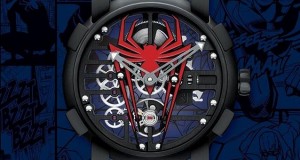