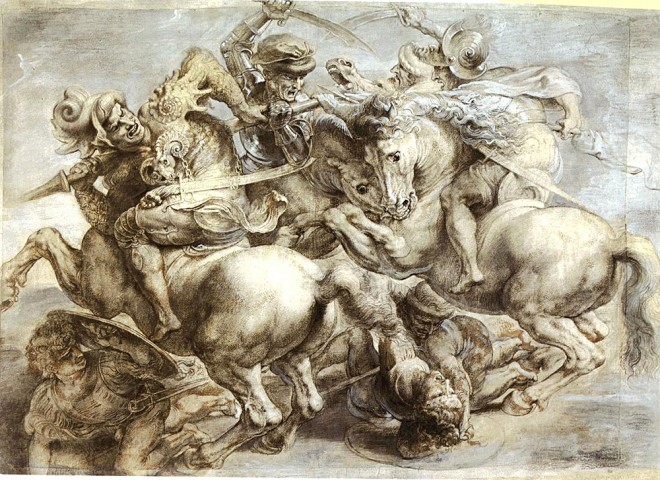 The 500th anniversary of Leonardo da Vinci’s death will be honored with a great exhibition program covering not only the life and work of the Renaissance master, but also his predecessors and followers. While many are waiting for the Leonardo da Vinci exposition in the Louvre, scheduled for October, the exhibition marathon has already started in the painter’s homeland. The art shows are mainly held in Florence and Milan, where the Italian artist lived and worked.

Young Leonardo came to Florence from his native town of Vinci presumably in 1466. He enrolled in the studio of the most famous sculptor and painter of that time, Andrea del Verrocchio, who also taught Sandro Botticelli and other eminent Florentine painters. Da Vinci even managed to paint one of the angels in Verrocchio’s artwork “The Baptism of Christ,” which is kept in the Uffizi Gallery. Now it has moved to the Palazzo Strozzi exhibition titled “Verrocchio, Master of Leonardo” (open until July 14). It collected more than 120 art pieces by Verrocchio and his disciples. Leonardo is represented here by drawings brought from the private art collection and a terracotta statuette “Madonna and Child” from the Victoria and Albert Museum. The latter was considered the artwork by Antonio Rossellino, but now it is exhibited as the only known early sculpture created by da Vinci. His early paintings, such as “Annunciation” (1472-1475) and the unfinished “The Adoration of the Magi” (1482), are presented in the Uffizi Gallery. There are two Leonardo da Vinci expositions in the Palazzo Vecchio. “Leonardo and Florence” (open until June 24) includes 12 pages from the famous Renaissance manuscript “Atlantic Code” and “The Savior” – a painting by Gian Giacomo Caprotti, his favorite student. The second Leonardo da Vinci exposition – “Following the Battle of Anghiari” (open until January 12, 2020) – tells about the fate of the lost painting by the Renaissance artist. “The Battle of Anghiari” represents an unfinished fresco that had to be featured on the wall of the Hall of the Five Hundred in Palazzo Vecchio. The art piece depicted the Florentines’ triumph over the Milanese at Anghiari in 1440. Interestingly, Michelangelo, a young rival of Leonardo, who was instructed to paint “The Battle of Cascina” on the opposite wall, also left his creation unfinished.