The Omega luxury watch brand has a rich history and the company always remembers about it by re-issuing its successful vintage models. Before the Olympic Games in Sochi, it presented the Petrograd limited edition created under the First World War sketches, shortly before Baselworld-2014 it announced the Speedmaster Mark II chronograph watch, which repeated the features of the “pilot” produced in the 1970s, and over time it showed the classic De Ville Tresor model designed in the style of the late 1940s. But the main news this year is the reissue of the classic Seamaster 300 vintage diver luxury watches released in 1957. Looking at the last century model and the new one it is difficult to find differences between them. In fact, it is the same Seamaster 300, but with new higher-level technologies. The most important improvement is the automatic COSC certified movement with coaxial escapement – Calibre 8400. And its most significant feature is the anti-magnetic protection up to 15,000 Gauss provided thanks to the spring made of silicon, and also axles and other parts made from Nivagauss alloy. Such a Vintage Diver Luxury watches can be put on a powerful magnet, and it will count down the time as if nothing has happened. The rest of the innovations relate to materials. The bezel is made of scratch-resistant ceramics with alloys to match it. In particular, Omega has used the amorphous metal called Liquidmetal, which is three times stronger than stainless steel, as well as a composite material – Ceragold. For the owner all these means that the bezel, which is considered to be one of the most sensitive parts of fine watches, will be unbreakable. The dial is made in the style of the first Omega Seamaster 300 Vintage Diver Luxury watches. In addition to Arabic numerals, it has received typical for that time markings that consist of bars and triangles. And if you look closely to the markup, you will also see that the dial made according to the sandwich technology consists of a plate with luminescent coating and a cover plate with index openings. This photosensitive coating looks like it has been covered with a patina that is also a nod to the history.

The case of this old style timepiece measures 41 mm in diameter. Depending on the model it can be made of stainless steel, titanium, titanium and Sedna red gold, as well as stainless steel and Sedna gold. The flagship of this collection of Vintage Diver Luxury watches is the model with platinum case and bracelet. Such a watch has been created for powerful people, both in terms of financial solvency and physical force – its weight is 420 grams. It features a blue bezel and also an enamel dial of the same color. This timepiece comes from a limited edition of 357 copies. All these high-end watches have water resistance up to 300 meters and power reserve of 60 hours.

The Art of Collecting African Art

The Philadelphia Show of Art and Antiques is Open Online 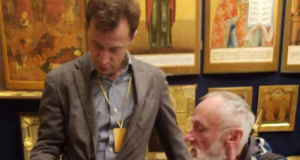