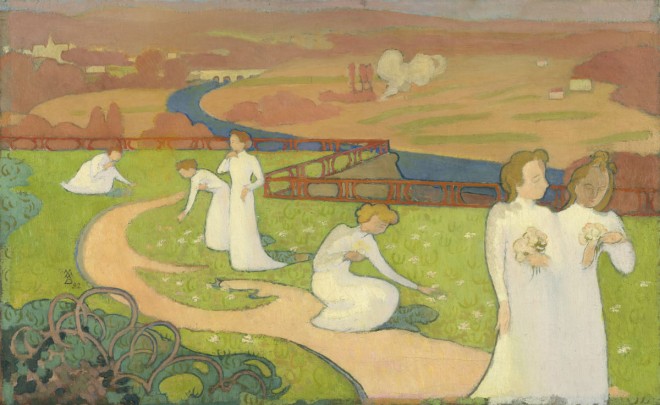 This year, major art museums of Paris have prepared a galore of fascinating art exhibitions for true fine art connoisseurs.

The Musée du Luxembourg – “The Nabis and The Décor”

The Musée du Luxembourg, with the assistance of the Grand Palais, the Musée d’Orsay, and the Musée de l’Orangerie, undertook the challenging task of presenting to the public the decorative artworks by Pierre Bonnard, Édouard Vuillard, Maurice Denis and other followers of the “Les Nabis” group. Their original, joyful and rhythmic art pieces were a response to the aesthetics of the historical style that dominated at the end of the XIX century. Curators have tried to recreate as fully as possible some of the leading collections of tapestries, panels, wallpapers, stained glass and ceramics, which were created by these masters, and most of which have dispersed over time. However, searching for originals has become difficult due to the lack of documents or photographs.

Everything that the experts managed to collect can be seen at the Paris art show titled “The Nabis and The Décor” until June 30.

The Musée Jacquemart-André – “Vilhelm Hammershøi, the Master of Danish Painting”

The Musée Jacquemart-André reveals a new view on a unique Danish artist Vilhelm Hammershøi. “The singer of loneliness, silence, and light” is famous for its hollow and subtly painted interiors, in which sometimes a woman is standing with her back to the viewer. The artist led a secluded life in the circle of his family – and the curators of the Paris art show called “Vilhelm Hammershøi, the Master of Danish Painting” (open until July 22) explore that exact relationship.

They first compare the painter’s artworks with the paintings created by his brother Svend, brother-in-law Peter Ilsted and friend Carl Holsøe. Forty works of art that reveal the mysterious and poetic world of the artist were borrowed from private collections, the largest Danish and Swedish fine art museums, as well as the Musée d’Orsay and Tate Britain art gallery.

The Grand Palais – “Red. Art and Utopia in the Land of the Soviets” and “The Moon” Any art lovers that take an interest in socialist art, from March 20 to July 1 can visit the Paris art show titled “Red. Art and Utopia in the Land of the Soviets.” The Grand Palace in Paris exhibits a series of essential artworks leased from the most significant Russian art and historical museums and the Centre Pompidou. They show how many artists sincerely wanted to participate in the construction of a new society, but held the opposite views on the art of socialism. And since the late 1920s, such debates have been drowned out by the Stalinist regime, which established socialist realism – an aesthetic doctrine that began to govern all spheres of creativity.

The same Grand Palais on April 3 will hold an exhibition dedicated to the 50th anniversary of the first landing of man on the Moon. The art exhibition called “The Moon” traces a long history that connects people with this celestial body through works of art and objects inspired by it. The exposition, divided into five parts, is a journey to the Moon in reality and imagination. Each section sends visitors on a journey through time, discovering fantastic art pieces from antiquity to the present day created in Europe, in African, Arab and Far Eastern civilizations. Any interested art admirer can visit this Paris art show until July 22.