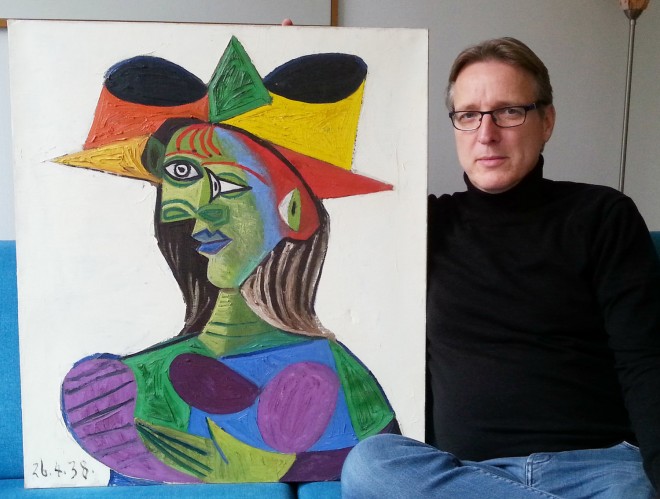 Pablo Picasso’s art piece titled “Portrait of Dora Maar,” which was stolen 20 years ago from the sheik’s yacht on the Côte d’Azur, was found by an expert in art recovery Arthur Brand.

A colorful canvas artwork “Portrait of Dora Maar” (1938) by the legendary painter worth €25 million was found by Dutch art detective Arthur Brand as a result of a four-year investigation. “I unpacked the painting and hung it on the wall overnight,” he told AFP. “So for one day, my house became one of the most expensive houses in Amsterdam.”

The story began in 1999 when Picasso’s art piece was stolen from the yacht of a billionaire from Saudi Arabia, Sheikh Abdul Mohsen Abdulmalik al-Sheikh, near the Côte d’Azur. The theft of the canvas painting, which at that time was estimated at €7 million, baffled the French police and forced collectors to monitor the safety of their yachts closely. In 2015, Arthur Brand first heard rumors that a particular “Picasso’s art piece stolen from a yacht” is circulating in criminal circles of the Netherlands. However, as the art recovery expert clarifies, at that time he “did not know what painting it was.” It turned out that the world-famous artwork for many years passed from hand to hand and was often used as collateral, surfacing in the arms and drugs deals. Brand began to spread the information that he was looking for “Portrait of Dora Maar,” and then some people contacted him and brought a picture wrapped in cloth and garbage bags, directly to his home. “Two representatives of the Dutch businessman contacted me and said that their client has the painting,” art detective shares details of this story. “He was completely baffled. He thought that he had purchased and shipped the Picasso’s art piece legally. It turned out that the transaction was legal, unlike the payment method.” Brand involved the Dutch and French police, which had already closed the case, and they promised that they would not pursue the current owner. “Since the theft happened, the picture passed from hand to hand at least ten times,” expert says.

As of now, the “Portrait of Dora Maar” is kept in the insurance company, which will decide its future fate.

Art historian and detective, Arthur Brand is a famous person. He has already been nicknamed “Indiana Jones of the art world.” In 2018, he returned to Cyprus Byzantine a mosaic depicting St. Mark, stolen from the Church in 1974. Before that, in 2015, he discovered “Hitler’s horses” – two bronze sculptures of horses by Nazi sculptor Joseph Torak. Brand was posing as an art collector for several years and was able to get on the trail of sculptures in Dallas. The list of successful recoveries carried out by the detective also includes the return of the canvas artwork “Adolescence” by Salvador Dali, “The Musician” by Tamara de Lempicka, and few other.