For a man with high-end fashion taste, diamond gold watch is the perfect accessory. It’s beautiful to look at, functional, and its understated style and class can truly bring together any look, whether the wearer is attending a business meeting or a formal function. The Titanic DNA Steampunk Watch from Romain Jerome is the perfect marriage between luxury and rugged elegance. Think of the watch as a masterpiece of synergy: two unlike objects that, when combined, create something that has the elements of both objects presented as one coherent whole. Just like DNA, this watch brings together the power of the Titanic, and the futuristic ruggedness of steampunk.

When one hears the word “Titanic”, it brings to mind power, strength, and wealth, everything that the ship itself symbolized when it was built in 1909. Wealthy people flocked to be one of the passengers on the Titanic, because of the prestige and class that its name brought, and wearing the Romain Jerome diamond gold watch brings to mind that same prestige and class. When one looks into the face of this watch, one can see the masterful engineering and craftsmanship that went into making it. The watch is powered by an automatic movement, allowing it to give accurate time keeping. 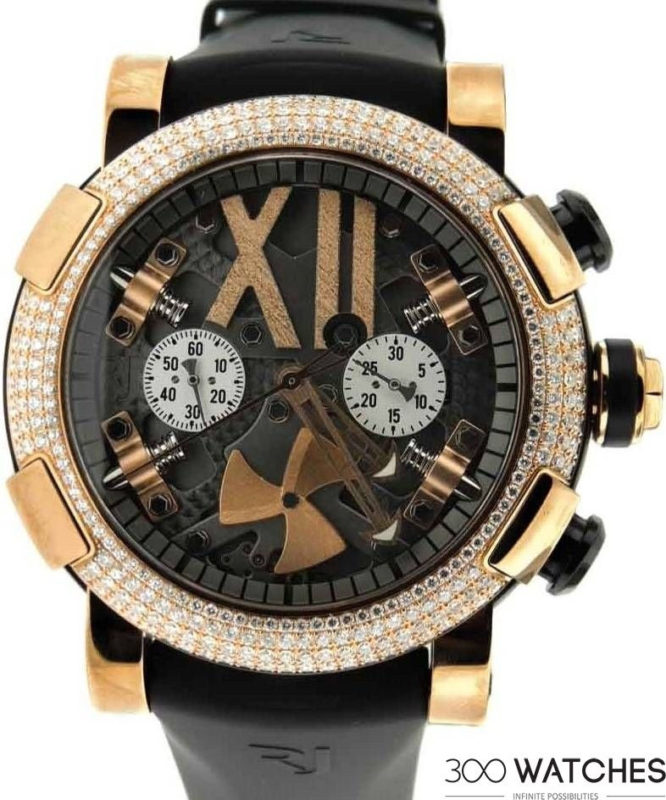 The first thing that jumps out at you is the outer ring of glittering diamonds, which is like a sea of wealth twinkling from your wrist. A singe glance can tell any on-looker that the wearer is a person of power and prestige.  Another indicator of the wealth and power of the wearer is the 18k rose gold case. Rose gold is subtle, gorgeous to behold, and has the perfect shade to complement any power color that a man would choose to wear.

Another interesting facet of this watch is the steampunk theme that it has. Steampunk is an interesting theme to use in a luxury watch, as most people would not associate steampunk with luxury. Steampunk has a very rugged, but at the same time, futuristic look, and the Romain Jerome steampunk watch has exactly that. Rugged, futuristic, but still elegant and classy. When you look at the steampunk dial, you get a sense of this perfectly working machine, where the whole is more than just the sum of its

However, the Romain Jerome Steampunk watch is not just style, but also substance. The watch has an ergonomic design that makes it comfortable to wear, allowing it to mold against the curves of the wearer’s wrist. It features a full-sized black rubber strap, which complements the 18mm thick case. The watch closes with a butterfly clasp, making it easy to wear or remove the watch with just one hand. It is also water resistant up to 30 meters, so the wearers won’t need to worry about taking off their watch while washing their hands, or getting it a little wet in the rain while holding an umbrella over their date