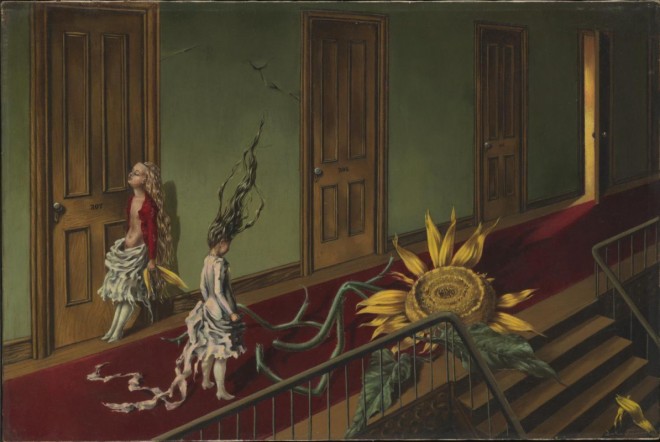 The Tate Modern art gallery in London opens the first large-scale exhibition in a quarter of a century of American surrealist artist Dorothea Tanning. The exhibition will include 100 art works covering her entire seventy-year career – from mysterious paintings to strange soft sculptures.

Dorothea Tanning sought to portray “unknown but recognizable states,” suggesting that there was more to life than meets the eye. She became acquainted with surrealism in New York City in the 1930s. In 1942, the artist created a self-portrait, which attracted the attention of Max Ernst, a prolific German and French artist, who would later become Dorothea’s husband. In the picture, Tanning depicted herself topless, gazing somewhere past the viewer, in an open dress in the Elizabethan style, with a skirt of algae hanging down. At her feet, sits a creature in which you can see the Griffin from “Alice’s Adventures in Wonderland,” and behind her, the doors open endlessly – a motif that will often occur in the nightmare art creations of the artist over the next decades.

The most famous painting of all that will be presented at the exhibition is the “Eine Kleine Nachtmusik,” (“Little Night Serenade”) created in 1943 and depicting two girls in the hotel corridor with a row of doors. One of the girls leaned against the doorpost in a pose, suggestive of a more adult woman. The hair of another is raised above her head, giving the composition some energy. Before her lies a sunflower, and on the edge of the canvas, one of the doors is slightly open, either showing the sun-drenched desert, or a burning hell. If these girls are on the verge of becoming, then the nightmare art work by Tanning captured the moment before the explosion, where the unknown violent forces dwell. A similar message can be seen in the painting titled “Children’s games,” where two girls in a dark corridor tear wallpaper, under which something resembling flesh is found. Tanning later wrote in her autobiography that during her childhood in Galesburg, Illinois, “nothing happened but wallpaper.” Reinterpreted 20 years later, they became a powerful living force.

Part of Tanning’s surreal fantasies can now be seen as morally questionable. For example, the nightmare art painting “The Guest Room” (1952) depicts a naked girl. Behind the door, there is her blindfolded twin, in the depths of the room rises the figure of death, and the other girl in bed hugs a sinister doll with an amputated hand. In 1955, the nightmare art of Dorothea Tanning changed to become more abstract. In 1949, she and Ernst began to spend more time in Paris and finally moved there in the 1950s. “My paintings literally split,” wrote the artist in her autobiography. She started creating large artworks, while her strokes became more sweeping and careless. However, the compositions are still inhabited by characters whose bodies and limbs stretch through the canvases. In the 1980s, girls from early paintings seem to appear in new guises. The characters of “Daughters” (1983) have curved shapes, and “Door 84” (1984) is reminiscent of the paintings of Willem de Kooning. One girl thoughtfully holds the door with her foot, and the other crosses the canvas as if flying.

In the 1970s and 1980s, Tanning simultaneously created abstract paintings and soft sculptures, which she began to sew in 1969. Fabric and padding she found in her own wardrobe and flea markets. The spine in a series of soft human figures, the artist made with table tennis balls, as, for example, in “Nue couchée” (“Reclining Naked”), reminiscent of a strongly bent figure. The culmination of these surrealistic art works was “Hôtel du Pavot, Chambre 202” (“Poppy Hotel, Room 202”) – art gallery installation of sculptural figures, completed in 1973. At the Tate Modern exhibition, it will be presented in a separate room and will likely be shown in full for the last time, because the objects are incredibly fragile.

The “Dorothea Tanning” exhibition in the Tate Modern art gallery will be held from February 27 to June 9.