The Renewed National Museum of Qatar

You are here: Home » Art & Culture » The Renewed National Museum of Qatar 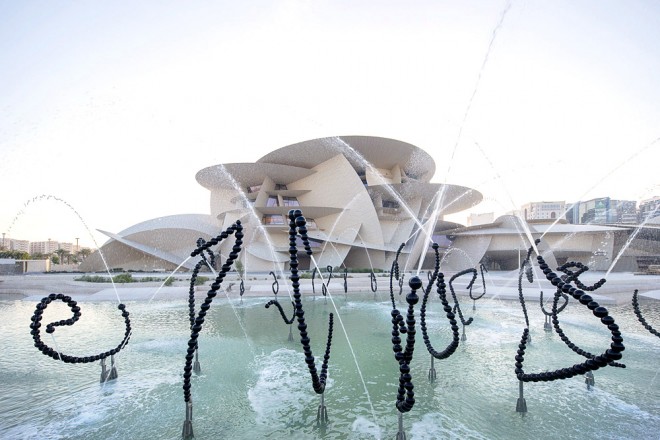 The National Museum of Qatar designed by Jean Nouvel in Doha has 11 immersive galleries and the artwork by Ai Weiwei created specifically for it. The new National Museum of Qatar, according to Karen Excel, a scientist from the UK who has been working as a consultant for the project for the past four years, “is absolutely nothing like how people usually imagine a historical museum.” The long-awaited museum in Doha has opened its doors on March 28.

Unlike most art collections of the European museums and galleries, which are developing slowly, the Doha Museum collection has grown rapidly in less than a decade. The author of the project of the new museum building, the cost of which is not disclosed, is the French architect Jean Nouvel. The National Museum of Qatar will be among the largest museums in the world: its area is about 40 m2, which is comparable to the size of the Vatican Museums. The exhibition, created based on consultations with both local and foreign experts, includes exhibits from the field of natural history and archaeological finds collected during field research. However, material objects, according to Excel, “only one of the components of a multi-layered narrative, which also uses images, video, sounds, tactile elements, and smells.” Eleven immersive galleries tell the history of the country from the time of the formation of the Qatar Peninsula to the present day.

Among the artists and filmmakers who revived the history of Qatar in their artworks created for the National Museum of Qatar by the particular order, is the Chinese artist Ai Weiwei. His sculptural installation “Pearl Fountain” is dedicated to the catastrophic decline of the pearl trade from 1913 to 1939. In January 1940, the city of Dukhan on the West coast of the Qatar Peninsula the oil was discovered, which turned the tiny state of the Persian Gulf into one of the wealthiest countries in the world. At a press conference held last December, representatives of the Doha museum named the restored Palace of Sheikh Abdullah as the most valuable exhibit. It housed the National Museum for 30 years, since 1975. It is expected that the critical cultural projects will be completed by 2022 when Qatar will host the final part of the World Cup.