“Thérèse on a Bench Seat” by Balthus Gets Auctioned

You are here: Home » Art & Culture » “Thérèse on a Bench Seat” by Balthus Gets Auctioned 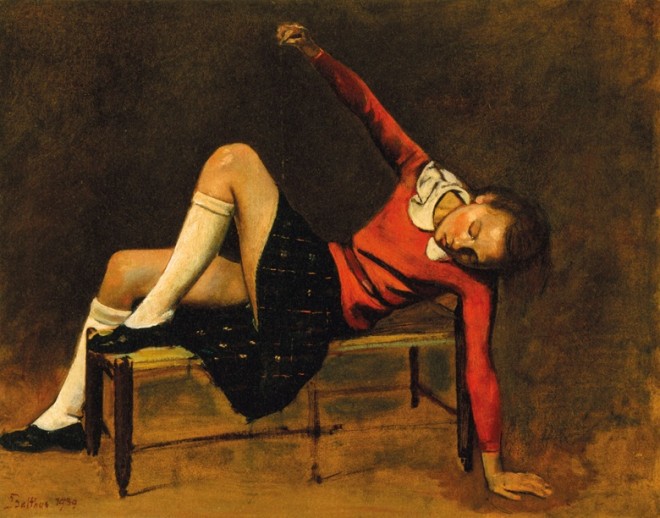 In May, Christie’s Auction House will put up the art collection of Dorothy and Richard Sherwood for sale. Major works will be offered in two evening sales – those of impressionist and post-impressionist art pieces and the works by the Art Nouveau artists on May 13, and the postwar and contemporary art – on May 15.

One of the central lots will be a masterpiece by Balthus “Thérèse on a Bench Seat” (1939). This remarkable painting used to hang in Sherwood’s living room for nearly sixty years. In 2013, it was chosen as the face of the exhibition titled “Balthus: Cats and Girls” at the Metropolitan Museum of Art. Until now, it was the last appearance of the artwork in public.

“Thérèse on a Bench Seat” by Balthus that was previously estimated at 12-18 million dollars will be presented at the evening sale of art pieces by impressionists and modernists on May 13. It is the last panel of the famous series of portraits depicting the artist’s muse Thérèse Blanchard. Balthus met her at the end of 1935, and at the time of creation of this artwork, the girl was 14 years old. She came from a large family who lived a few blocks away from the artist’s studio. For three years, Thérèse became the heroine of a dozen paintings, which are considered the most delicate and sensitive portraits by Balthus. They are also included in the list of his best works.

“Thérèse on a Bench Seat” by Balthus primarily shows the artist’s professional interest in composition. He depicts a model in a unique position, which does not have a distinct, recognizable precedent. Besides, the painter sought to awaken her inner world with a sense of presence that looks convincing based on the mechanics of her young figure’s movement. Balthus created a large number of nuances in the unusual pose of the girl, who seems wholly absorbed in the moment of the game.

American art critic Sabine Rewald believes that Thérèse was sullen and not very attractive, but the artist depicted her intelligence and strength. It was challenging to trace the fate of the model after 1939. Only after thirteen years of searching, Sabine Rewald found out that the heroine of Balthus paintings died in 1950 in the hospital at the age of 25. The art historian suggests that Thérèse could pass away because she endured a difficult delivery, but the hospital staff refused to talk to the scientist since she was not a relative of the girl. Any attempts to find the family of Thérèse were in vain. “Thérèse on a Bench Seat” by Balthus is only one of the numerous masterpieces from the Dorothy and Richard Sherwood collection. Along with such avid art collectors as Ronald Lauder and Philip Niarchos, the Sherwoods were well-known public figures and collectors. Among the collectors of works of art, they were famous for in-depth study of paintings, drawings, and sculptures that they chose. As a result, their art collection was distinguished by exquisite taste and exceptional quality.