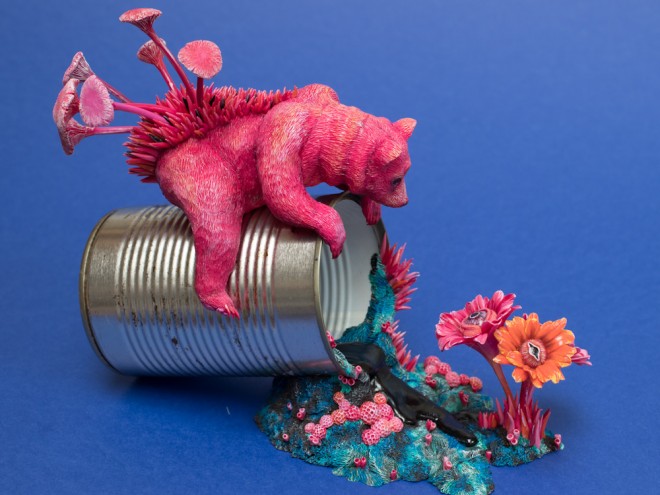 The problem of environmental pollution is becoming more acute and more dangerous every year. And everyone who is not indifferent to this problem, in his/her own way tries to minimize the damage caused to nature: sorts garbage and sends it for processing, buys products in eco-friendly packaging, refuses to use plastic bags, etc. On the other hand, you can follow the example of a sculptor Stephanie Kilgast, and turn garbage into incredible pieces of artwork. Stephanie Kilgast was born in Frankfurt, Germany, but now she lives and works in France. For eight years, she honed her skills, creating miniature hyperrealistic copies of food. Stephanie’s best artworks were popular among artists who create dollhouses and even participated in a few art gallery exhibitions around the world. However, at some point, Kilgast decided to move in a new direction and two years ago began to create a cycle of bright sculptures using empty cans and plastic containers. Only the material with which Stephanie works – polymer clay of all colors of the rainbow – remained unchanged. In addition, the combination of one with the other gives the finished pieces of artwork inspired by trash a somewhat paradoxical mood – cheerful and post-apocalyptic at the same time, kind of a nightmare art. On her official website, the artist published kind of a manifesto in which she explains the essence of her pieces of artwork: “My work is an ode to life, where plants and fungi meet insects, animals, and minerals. These encounters are growing in a colorful swirl of diversity, and the erratic growth develops on found, thrifted or discarded objects, in a dialogue between humanity and nature. Humans are a part of nature, which we often like to forget, creating an artificial barrier of tar between us and the mud. Unfortunately, by destroying our environment, we are destroying ourselves. The rest of nature observes us, waiting to see if we will manage the environmental crisis we have created. Yet, science, art, and abstract thinking make human life worth saving. So it’s up to us to find an equilibrium between our activities, and our desire to thrive intellectually and culturally, without completely eradicating our very home. Let nature grow back.” In addition to the official website where every interested person and avid environmentalist can purchase some of the trash-inspired pieces of artworks by Stephanie Kilgast, the sculptor has social media accounts, including YouTube channel, where she posts videos of the creative process. Perhaps only thanks to them you can fully understand what hard work it is.