Virtual Art from The Mauritshuis

You are here: Home » Art & Culture » Virtual Art from The Mauritshuis 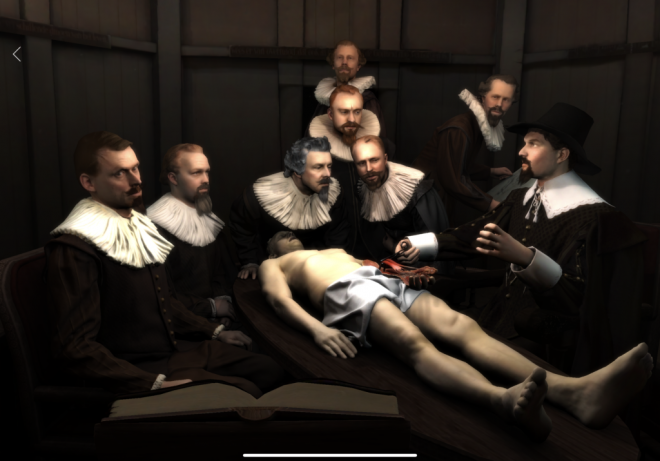 The Mauritshuis Museum in The Hague has joined the list of virtual art galleries – the institution released a new app with augmented reality, which allows viewers to “enter” is one of the most famous paintings by Rembrandt – “The Anatomy Lesson of Dr. Nicolaes Tulp.” This collective portrait of members of the Amsterdam Guild of Surgeons was the beginning of the path to fame and fortune for the 25-year-old master. The virtual art project called “Rembrandt Reality” is dedicated to the 350th anniversary of the death of Rembrandt van Rijn (1606-1669). Fine art museums both in the Netherlands and abroad are preparing for this date. The application created by the Dutch startup “Capitola” allows viewers to take part in the anatomy lesson of Dr. Nicholas Tulp. They can learn more about the picture and its characters, including the executed criminal nicknamed Aris Kindt, whose body is opened by the head of the Surgeons’ Guild.

Previously, Capitola in cooperation with Mauritshuis released a program called “HoloLens,” which allows any interested art lover to study “Saul and David” (1651-1658). It is another large canvas artwork by Rembrandt from the art gallery’s collection, the attribution of which was preceded by a fascinating story.

The virtual art application gives viewers information about the iconic picture, pointing to small details, some of which are not visible to the naked eye. For example, Kindt had his hand cut off before the execution as punishment for theft, and three-dimensional scanning showed that the artist had initially painted the stump before he finished painting the rest of the hand. Perhaps, the creator of the Flemish and Dutch artworks did not want to distract viewers’ attention from the central theme of the painting. To recreate the legendary picture in the virtual world, Capitola employees found twins of all the characters of the composition and made appropriate hairstyles and makeup. Then there was a scrupulous 3D shooting of all the actors, as well as the original hall in the Waag. It took five months to put the whole scene together.

Projects such as those implemented by Capitola are not uncommon in today’s world. Museums and individual developers are continually experimenting with new ways of interacting with historical works of art. Thus, four years ago, an ambitious game designer Jack McCauley from New York offered his version of virtual art reality in Van Gogh’s painting “The Night Café” (1888). He also included several other iconic artworks by the artist – a vase of sunflowers, a self-portrait, a chair, which painter depicted in his bedroom, and even a fragment of another masterpiece – “The Starry Night” (1889).

Original art piece titled “The Anatomy Lesson of Dr. Nicolaes Tulp” is now a part of the exhibition, which was the Mauritshuis which timed to 350th anniversary of Rembrandt’s death. The famous art gallery exhibited all eighteen paintings from its collection, which belong or were attributed to the master. They are complemented by artworks that are no longer considered to be executed by the legendary painter.