You are here: Home » Art & Culture » Symbolism in the Pre-Raphaelite Art. William Hunt

Pre-Raphaelite art appeared in England in the 1850s as denying principles of the British Royal Academy. Classic academic style, based on Sir Joshua Reynold’s art, was foreign to Pre-Raphaelites. They despised the tradition of chiaroscuro and shades of “tobacco juice,” traditional genres of portraits and landscapes, and academic manner. The Brotherhood called for guidelines of naturalism and artworks before Renaissance art. They were particularly inspired by the work of Andrea di Cione di Arcangelo, better known as Orcagna, and Benozzo Gozzoli. The topics of their art were medieval plots, themes from Arthurian legends, Dante, and Shakespeare.

Pre-Raphaelites were not symbolists, but some of their works do have symbolic elements. One of the most expressive “symbolists” became William Holman Hunt. His art stood out against works of other members of the Brotherhood with bright and rich colors, plots, and moralizing ideas that paid attention to social and ethical problems in society.

The Light of the World

Symbolism is perfectly reflected in The Light of the World, a beautiful piece of Pre-Raphaelite art, created by William Hunt. The painting illustrates words from Revelation (3:20): “Behold, I stand at the door and knock; if any man hears My voice, and opens the door, I will come in to him and will sup with him, and he with Me.” Christ in this painting is knocking on the door as in the human heart. Weeds wrap the door, which symbolizes the sin in the soul. There are some apples in the grass, which also refers to the original sin of Adam and Eve. Lantern light implies the light of clear thoughts and purification.

The plot of this William Hunt`s work goes on in England in the late 19th century, but not in the King Arthur or Bible times, which are more common for Pre-Raphaelite art. The artist sought to demonstrate the danger of the edge the young women got close to. Each detail of the painting has its sense or symbolic subtext. For example, a watch with a closed cover means a waste of time. Glove on the floor is an impersonation of a lover, a lonely female fate. A tangled ball of yarn symbolizes the complicated situation of the heroine. The cat playing with the bird with a broken wind under the table represents the characters of this artwork. 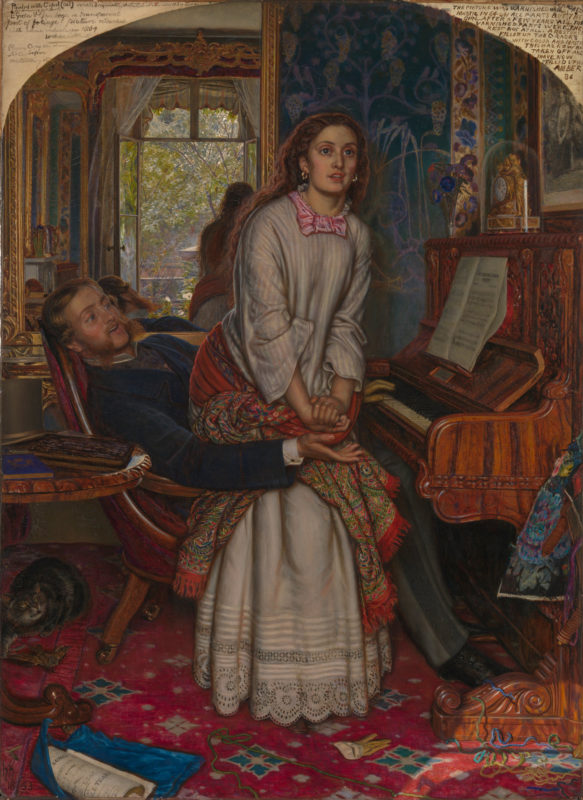 Pre-Raphaelite art is interesting for its ambiguities. You should definitely check these symbolic and instructive works known for their medieval plots and fiery redhead girls.